A eureka moment or a slow hunch? 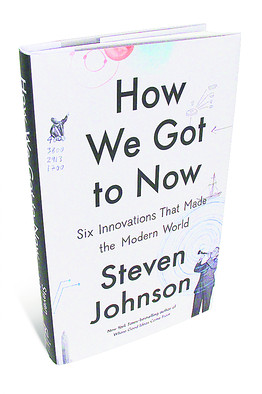 Great review of Steven Johnson’s How We Got to Now in the Wall Street Journal.  The author details what he calls the “six innovations that made the modern world” in chapters titled “Glass,” “Cold,” “Sound,” “Clean,” “Time,” and “Light.”

Theories of innovation and entrepreneurship have always yo-yoed between two basic ideas. First, that it’s all about the single brilliant individual and his eureka moment that changes the world. Second, that it’s about networks, collaboration and context. The truth, as in all such philosophical dogfights, is somewhere in between…  Johnson has become one of the most persuasive advocates for the role of collaboration in innovation.  [His] method is to start with a single innovation and then hopscotch through history to illuminate its vast and often unintended consequences…

Of the six interesting chapters/innovations we’ll highlight “Cold” because it harmonizes well with things we’ve written about entrepreneurship.

In the chapter on “Cold,” he opens with the story of Frederic Tudor, an entrepreneur from Boston who “took three things that the market had effectively priced at zero—ice, sawdust and an empty vessel—and turned them into a flourishing business,” using the sawdust to keep the ice insulated while transporting it from the northeastern United States down to the Caribbean. Then we are on to the naturalist Clarence Birdseye, who noticed when ice fishing with the Inuit of Labrador that some fish froze immediately in the cold air after being pulled out of Arctic waters and that they tasted much better when cooked than fish that had been frozen more slowly. Add years of scientific noodling and you have a revolution in frozen food.

Mr. Johnson writes: “It was not a sudden epiphany or lightbulb moment, but something much more leisurely, an idea taking shape piece by piece over time. It was what I like to call a ‘slow hunch’—the anti-‘lightbulb moment,’ the idea that comes into focus over decades, not seconds.” Rather than an icy epiphany, Birdseye’s insight was an agglomeration of his experiences, his inquisitiveness and the availability of industrial technology at that time, which allowed him to build a production line to reproduce natural flash-freezing.

Entrepreneurial inspiration can come in different forms and from different sources.

Frederic Tudor was a contrarian value creator who saw economic value where others saw heaps of nothing, and who defied conventional wisdom with determination.  Some of the best entrepreneurs are distinguished more by their ability to achieve the impossible than by the originality of their thinking.  You don’t need to be a geek or a conventional innovator.

Clarence Birdseye let his unconscious mind process information in the background and saw meaningful combinations where others did not – in other words he let serendipity work for him.  Different than simple luck, and a close cousin of creativity, serendipity can be encouraged by an “optimal degree of wastefulness.”  Birdseye’s “slow hunch” and “agglomeration of experiences” could be dismissed by some as directionless activity.  But trillions of frozen peas might say otherwise.