It was 500 years ago today that Ponce de Leon landed at St. Augustine, ‘discovering’ Florida for Europe. 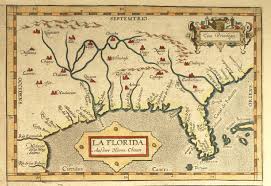 In honor of that historic event Adam Putnam, Florida’s Commissioner of Agriculture, wrote a column published in several of the State’s newspapers in which he recounts some interesting state history and sings the praises of living and working in Florida today.

Sitting at our desks, looking out the window at another gorgeous day in St. Petersburg – we find it impossible to disagree.

We enjoyed learning a few new things about our state’s early history and thought them worth passing along.  Here’s an excerpt from Putnam’s column:

Spanish explorer Juan Ponce de Leon arrived in St. Augustine while searching — as legend has it — for the Fountain of Youth. On April 2, 1513, Ponce de Leon became the first European to discover the land where Native Americans had already lived for centuries. He called this land La Florida…

Every school child in America learns that the Pilgrims celebrated the nation’s first Thanksgiving meal after landing at Plymouth Rock. Yet more than 50 years before that, in 1565, Spanish settlers shared a harvest meal with Native Americans in Florida.

Pocahontas was immortalized in the Disney film, but more than 40 years before she saved John Smith, Pedro Menendez de Aviles – the first governor of Florida – negotiated a truce with the Calusa tribe by marrying the king’s sister.

Texas is known as the land of the cowboys, but Florida was the first place in the New World to have horses and cows, and the cowboys that came with them. Brought over by explorers and settlers from the Old World, we now know these animals as the original Cracker horse and Cracker cattle breeds.